skip to main | skip to sidebar

Don't miss it for rounded perspective on this 'current' issue.
Posted by grapevine at 12:33 PM No comments:

Posted by grapevine at 6:11 AM No comments:

The Conservative View
by Russell Turner
I have often heard the old expression, “when in Rome, do as the Romans do”. I believe that statement to be one of respect. When I visit someone and observe how they conduct their business, I often remind myself that how they do things is their business and not mine. Unless asked, I don’t try to convert them to fit into my personal belief system. Most countries would take a very dim view at someone from another country protesting and carrying the flag of another country within their borders.

We Americans are a tolerant people to other people’s values and beliefs. I recently read some comments from our founding fathers concerning the allowing of other people from different cultures into our country.

In 1820 Alexander Hamilton wrote, "The United States have already felt the evils of incorporating a large number of foreigners into their national mass; by promoting in different classes different predilections in favor of particular foreign nations, and antipathies against others, it has served very much to divide the community and to distract our councils. It has been often likely to compromise the interests of our own country in favor of another. The permanent effect of such a policy will be, that in times of great public danger there will be always a numerous body of men, of whom there may be just grounds of distrust; the suspicion alone will weaken the strength of the nation, but their force may be actually employed in assisting an invader."

While we Americans can be tolerant, we need to remember that the values our country was founded upon are just as important as those of any other country. It is strange that no other country in the world is as tolerant to other people’s beliefs to the extent that it degrades our own heritage.

If the people in Rome were so tolerant of other cultures and allowed their values to be replaced, their city would no longer be Rome. Whenever you hear of blanket amnesty we need to remember the words of Alexander Hamilton,
"To admit foreigners indiscriminately to the rights of citizens the moment they put foot in our country would be nothing less than to admit the Grecian horse into the citadel of our liberty and sovereignty."

Over the past weeks the state of Arizona has taken much abuse for merely wanting to know who is coming into their house, maybe the current administration needs to read the words of the men who actually founded this country.

Russell Turner lives in Stillwell, OK and for years has writen a weekly article for several area newspapers under by-line...The Conservative View.
Posted by grapevine at 7:57 PM No comments:

Filing to run for office opened today across Oklahoma for all elective offices. It will continue until 5:00pm on Wednesday June 9.

Now is the time for all good men to come to the aid of their city ~ county ~ state ~ Nation! Throw YOUR hat in the ring!
Posted by grapevine at 4:27 PM No comments:

One of the hottest issues with voters is the automatic 5% property tax increase Oklahoma property owners face each year! Sen. Jim Reynolds held a press conference on Tuesday, April 27, and is asking for HELP from voters to gain a floor vote on Senate Joint Resolution 5, the property tax cap that he has pressed in recent years! [reduction from 5% to 3%]. The State Senate has approved this bill and Reynolds has ask that House Speaker, Chris Benge, R-Tulsa, let the bill be heard by the House of Representatives. Benge has not agreed to let this bill be heard.

The Grapevine would encourage all who have interest/concern in this bill to contact Speaker Benge, Senator Reynolds, along with your area Legislator. Voters need to read a copy of the bill. Voters want ALL properties included as in original State Question, not just applying to a homestead [only].

Now, the Legislature could place this question [directly] on ballot [state question] for the people to vote with no signature required by the Governor; OR..... it could be passed through the Legislature and appears any veto by the Governor could be over ridden by the Legislature. Seems problem is.....Legislature (House) doesn't want to address this issue. Why? No doubt the teachers union lobbies hard against any reduction in this tax.

It's an election year. Voters need to ask the candidates where they stand on this issue. Property owners need relief NOW!

PLAY as you PAY!

Let's not dwell on the fairness of such an arrangement for financing the activities of the federal government. Instead, let's ask what kind of incentives and results such an arrangement produces and ask ourselves whether these results are good for our country. That's a question to be asked whether or not one has federal income tax liabilities. Having 121 million Americans completely outside the federal income tax system, it's like throwing chum to political sharks. These Americans become a natural spending constituency for big-spending politicians. After all, if you have no income tax liability, how much do you care about deficits, how much Congress spends and the level of taxation?

Political calls for tax cuts and spending restraints have little appeal. Survey polls revealed this. According to The Harris Poll taken in June 2003, 51 percent of Democrats thought the tax cuts enacted by Congress were a bad thing while 16 percent of Republicans thought so. Among Democrats, 67 percent thought the tax cuts were unfair while 32 percent of Republicans thought so. When asked whether the $350-billion tax cut package will help your family finances, 59 percent of those surveyed said no and 35 percent said yes. Tax cuts to many Americans mean just one thing: They pose a threat to the federal handouts they receive.

Here's my perhaps politically incorrect question: If one has no financial stake in our country, how much of a say-so should he have in its management? Let's put it another way: I do not own stock, and hence have no financial stake, in Ford Motor Company. Do you think I should have voting rights or any say-so in the management of the company? I'm guessing that the average sane person's answer is no.

You say, "Williams, just where are you heading with this?" I'm not proposing that we take voting rights away from those who do not pay taxes. What I'm suggesting is that every American gets one vote in every federal election, plus another vote for each $20,000 he pays in federal taxes. With such a system, there'd be a modicum of linkage between one's financial stake in our country and his decision-making right. Of course, unequal voting power could be reduced by legislating lower taxes.

This is not a far-out idea. The founders worried about it. James Madison's concern about class warfare between the rich and the poor led him to favor the House of Representatives being elected by the people at large and the Senate elected by property owners. He said, "It is nevertheless certain, that there are various ways in which the rich may oppress the poor; in which property may oppress liberty; and that the world is filled with examples. It is necessary that the poor should have a defense against the danger. On the other hand, the danger to the holders of property cannot be disguised, if they be undefended against a majority without property."
Posted by grapevine at 12:53 PM No comments:

People who expected change from President O. had this in mind.....one in every garage! 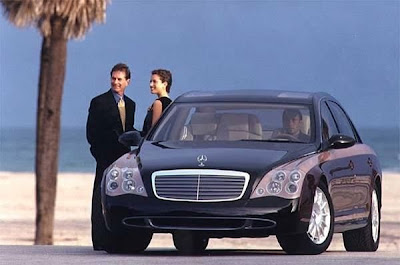 As 'big brother', set-us-back-100 years, policy takes shape this is what the President and Congress have in mind for you. Enjoy, it gets great milage, few green house emmissions! And, if push comes to shove....you can eat it! Can Mercedes do that? 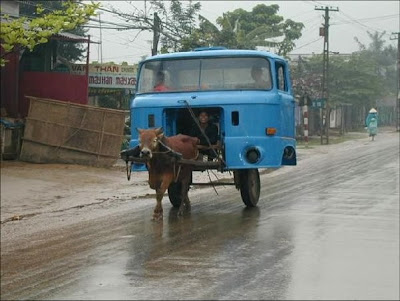 Posted by grapevine at 7:48 PM No comments:

"Our President came down from the mountaintop. He had applied the freshness of his independent thought to the critical measures at hand. He had convened his seminar, reviewed the reviews, analyzed the intelligence every which way, thought anew about everything, and lo and behold, he finally emerged to tell us some stuff we already knew." 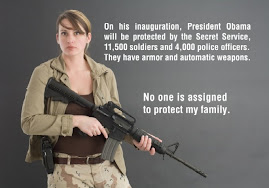 "Hold fast to the Bible as the sheet anchor of your liberties; write its precepts in your hearts, and practice them in your lives."
- President Ulysses S. Grant 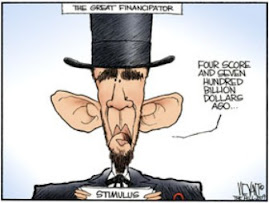 "One big reason for electing Obama is he is supposed to repair America's relations with the world. So, how's that working out so far?

“The size, scope, and purposes of our government are no longer anchored in and limited by our Constitution. For conservatives who want to restore limited government, their first order of business is to restore the authority of the Constitution's original intent.”
- Tom Krannawitter of the Claremont Institute 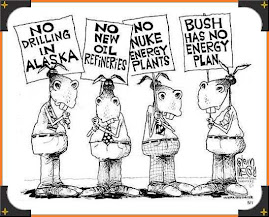 Patriotic to the Core! 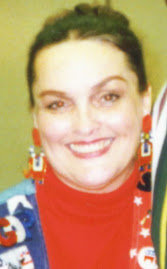 The Grapevine aka G. Williams